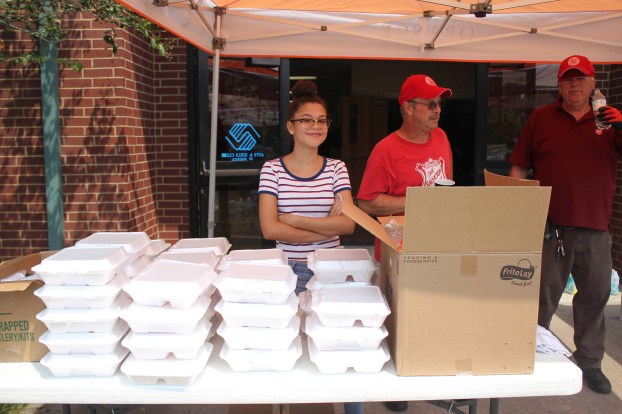 Leader file photo Salvation Army hands out meals after Hurricane Harvey floods the area in 2017. It is one of many ways the organization helps the community.

(Editor’s Note: This is part 5 of a 21-part series on the partners of United Way of Orange County.)

Many of heard of Salvation Army’s Boys and Girls Club but for this week’s installment of United Way Presents, we will look at the social services the organization offers to help a family with food and finances.

On the United Way website, the organization is described as “The Salvation Army is a ministry which provides a food pantry and offers social service assistance to individuals.”

In 1888, Adam Janelli came to America and settled in Dallas, Texas. One day, the rough citizens of the then frontier town, were startled when Janelli, wearing his Salvation Army uniform, began preaching on a downtown street corner. Every time he preached, people were finding Christ. Eager to get The Salvation Army established in Texas, Janelli wrote letters to General William Booth in London asking that Officers be sent to Texas. His letter barrage got so thick that the official word was given and The Salvation Army of Texas opened in 1889. Janelli gave both material and spiritual help to the poor and homeless, and to the people of Dallas, he became known as “Mr. Salvation Army.”

Funding through the grant from the United Way of Orange County helps Salvation Army provide the social service programs it has to offer such as a food pantry and assistance with utilities and rent.

“We would never be able to cover the need in the county without the grants,” Captain Jan Zuniga said. “United Way is a key impactor on what we are able to do.”

Salvation Army helps a dollar go a little further in a client’s pocket through the food pantry.

“They can get two weeks’ worth of food with a frozen meat option,” Zuniga said. “That bag of food is money in their pockets they can use to help with other things.”

As a direct result of United Way’s Day of Caring last year, the Army was able to supply residents with toiletry item kits.

“They were assembled for the homeless or others in need,” Zuniga said. “We were able to pass them out to those who needed them throughout the year.”

There are times when other items are needed such as diapers, soap, laundry soap and cleaning supplies as well.

For many, Salvation Army makes Christmas possible through the annual Angel Tree program. Online pre-registration is going on currently at http://www.pwhdev.net/AngelWebSQL/loginangel.html

It is suggested one uses a tablet or computer as the application has a time out feature. In order to make an appointment you will need an ANGEL CODE for your Appointment Location:

Applicants will need a form of ID, proof of residency, proof of income or SNAP Letter, birth certificates for children 12 and younger and proof of enrollment in an Orange County Texas school.

It also offers clothing and furniture vouchers for those in need at the Salvation Army Family Store located at 414 Donnell Street in West Orange.

As well as offering church services on Sunday. For more information on times for services, call 409-291-8400.

Salvation Army has also been first on the ground during times of disasters handing out cleaning supplies and other needed items including meals.

To make a donation to United Way of Orange County, visit https://www.uwoctx.org/civicrm/contribute/transact?reset=1&id=1