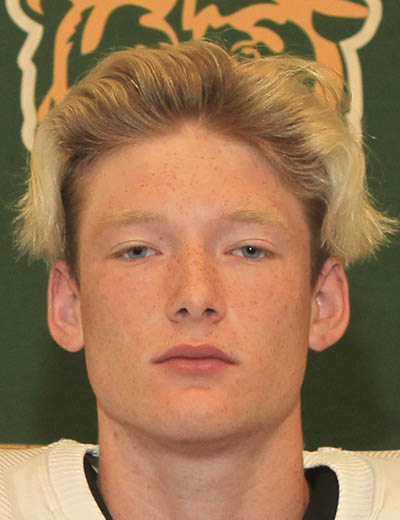 HUFFMAN – Little Cypress-Mauriceville Battlin’ Bears meant business in their District 10-4A Division I opener as they went on the road and toppled the Huffman Falcons 39-31 in Huffman Friday night. A battle of titans lived up to the hype and delivered a great game but it was the Bears that were able to give first-year head coach Eric Peevey his first district win in his first try.

This was a back and forth game that was decided in the final quarter, and by who could outscore the opposing offense. Both the Bears (5-1, 1-0) and the Falcons (5-1, 0-1) knew how important this game was, and left it all out on the field.

Ashton Landry had a great day passing for the Bears as he completed 8-of-15 passes for 111 yards and a pair of scores.. He was able to supplement the run game when they needed it. He would throw a couple of picks, but he was able to recover and keep slinging it throughout the night. His longest pass would be to Dwight Davis for 72 yards.

Landry’s rushing was a big help as well. He rushed for 99 yards on 18 carries on the night with two rushing touchdowns to boot. Most of the plays were scripted runs, but a good handful came from improvised scrambles. Landry’s speed and strength were a big reason he was able to perform so well against the Falcons.

Da’Marion Morris, would lead the rushing charge for the Bears. Morris rushed 13 times for 104 yards on the night and one rushing touchdown. Landry might have been the focal point for the Bears offense, but Morris was the heavy lifter as far as yards were concerned. He was able to break away from would-be tacklers and extend runs.

For the Falcons, Luke Thomas stood out all night long. Thomas would go 18-for-30 with 180 yards in the air. His main target was Gunnar Gates with nine catches for 94 yards. Thomas also led the team in rushing with 22 rushes for 129 yards. He accounted for one passing touchdown and three rushing touchdowns on the night. Thomas had a stellar performance, but the Bears offense was able to stay one step ahead of them all night long and the Falcons just couldn’t keep up.

After stopping the Falcons on the first drive, the Bears struck first and found the end zone. Landry got things going early with a quick 10-yard pass to Dean Reynolds. Dwight Davis and Morris would take care of the running with a couple big rushes from each of them this drive. Landry connected with Carson Peet for a 14-yard touchdown pass. The Bears missed the PAT but took a 6-0 lead with 4:55 left in the first quarter.

The Bears got the ball right back after another stop, and only needed one play to turn it into points. Landry would find Davis on the right side, and Davis sprinted past the defenders for a 72- yard touchdown. The Bears would go for two, but couldn’t convert. The Bears lead 12-0 with just under three minutes left in the first quarter.

The Falcons struck back in the second quarter, thanks to their passing game getting off the ground. After blocking a Bears punt, the Falcons had great field positioning to start the drive. Thomas would find Gunnar Gates for nine yards to start the drive. Then Thomas then found Tyler Wilkins for a big 32-yard touchdown pass. After the PAT the Falcons were back in the game, but the Bears lead 12-7 with 8:50 left in the 2nd Quarter.

Thomas took over the next drive thanks to a big defensive play for the Falcons. Will Swartz would swat and catch a pass from Landry for an interception. The Falcons did not waste any time and moved down the field quickly. Thomas got a few rushes on the march, including a big 24-yard run up the middle into the red zone. He would then punch it in from two yards out for the score. After the PAT went in, the Falcons took the lead over the Bears, 14-12 with time dwindling down in the first half.

The Falcons stormed down the field for another touchdown just before halftime. The drive was dominated by Thomas from behind center. Thomas would rush for 62 yards on six rushes and toss a nine-yard pass on the drive, including a 10-yard touchdown run. After the PAT went in, the Falcons led 21-12 with 15 seconds left in the first half.

The Bears came back in the second half with a strong drive for another score. Much like Thomas did, Landry took over on a scoring march with a couple of passes and a handful of rushes. Landry hada big 17-yard run and a pass to Keaton Rives for eight yards. Morris would also get in the mix with a 20-yard rush to put them in the red zone. Landry would punch it in from 10 yards out for the touchdown, muscling through the defense. After the PAT went through, the Falcons lead was shrunk to 21-19 early in the third quarter.

After a quick defensive stop, the Bears got good field positionand Landry took full advantage of it. Morris wobrokeoff a big 24-yard run to put the Bears in striking distance after a couple of smaller runs. Landry wwas able to punch in another touchdown, from three yards out this time. The Bears went for two, but couldn’t convert, but did take the lead back 25-21 late in the third.

The Bears increased their lead with another great offensive drive, this time Morris was the one doing the lifting. Landry would find him early with a quick pass for a couple of yards, then Morris would take it to the ground. With 40 yards of rushing on three carries, Morris walked the Bears into the end zone, sealing it with a quick five- yard run. The PAT was blocked, but the Bears lead 31-21 as the third quarter ended.

The Falcons cut the lead by three with a solid field goal from Jonathan Klepetko. Thomas got the Falcons down field with a few solid passes, the longest being a 22-yard pass to Wilkins from Thomas. Klepteko put it through the uprights from 28 yards out to trim it to 31-24.

The Bears answer back with another touchdown, to keep the lead just out of reach for the Falcons. Davis got a handful of carries on the march, after the Bears started with good field positioning. Davis longest rush would be 10 yards. Dean Reynolds found Davis with a tricky play in the red zone from 10 yards out. After the two-point conversion, the Bears led 39-24. Davis had 51 yards on seven totes.

Thomas continued to rush his way to the end zone with another score for the Falcons. The drive started with some quick passes that let the Falcons get down the field quickly, but the Bears made it a slow grind for them. Thomas found Gates four times, the longest pass going for 11. Thomas eventually punched it in from half a yard out after a few short rushes in the red zone. After the PAT the Bears lead was cut to 39-31 late in the third quarter.

The Bears would hang on and close this game out over the Falcons. With this win the Battlin’ Bears took a big step forward to trying to claim the top spot in their district by the end of the year. If all goes to plan for the season, this win should be a notch in the belt of a good team when all is said and done.

LIBERTY – Setting the tone early and never taking their foot off the gas pedal, the Orangefield Bobcats nailed down... read more