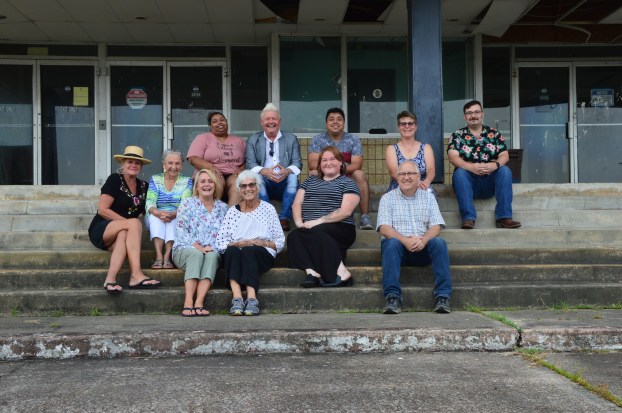 Dawn Burleigh/Orange Leader Orange Community Players Theater Group Board members announce the renaming of the building to the Jeff Hattman Center for Performing Arts in recognition of her contributions to live theater.

Orange Community Players (OCP) is serious about keeping live theater alive in Orange.
The theatrical group has seen many stumbling blocks since the rains destroyed the roof at its old location on Division Street and relocated to the old movie theater building on Bowling Lane. The group is making progress towards opening the doors for performances as construction and renovations are underway. JackBuilt was hired as the contractor so the show could go on.

“We received a grant for a portable stage which will allow us to have some productions,” Dianna Hill said.

A date has not been set for when the doors will reopen as yet, but progress is making it possible.
OCP lost everything from scripts, wardrobes, to sound systems when Hurricane Harvey inundated the area with historic record of rain.
Orange Community Players was originally founded as “Town Theatre” in 1950. Productions were held at Helen Carr Junior High School and Anderson Elementary School.  In 1957, Town Theatre was renamed “Orange Community Players.” Season tickets could be purchased for five dollars, according it its website.

Johnnie Faye Jeff Hattman was instrumental in starting and keeping the theater group going. The building will be renamed in her honor.

She started her teaching career at Cove Elementary and ended it 34 years later at Little Cypress Mauriceville High School where she directed 12 musicals and 12 one act plays.

Hattman was one of the founding members of Orange Community Players in 1951 where she directed “Hello Dolly”, “Music Man”, “Quilters”, the entire “Nunsense” series, “Joseph and the Amazing Technicolor Dreamcoat”, “South Pacific” and many others, all of this with her husband, Sam’s, tireless support. Although Melissa, Hattman’s daughter, lived in Houston and later, in St. Louis, she never missed a play that was directed by her mom. She loved life and all those whose lives she touched including students, actors, countless friends, Sam, Melissa and Kathy.

The production group was housed at its previous location on Division Ave. from 1960 to 2017.

From staff reports August 6 was a special day for Lem ‘Bubba’ Brooks Sr. as he turned 96 year young.... read more