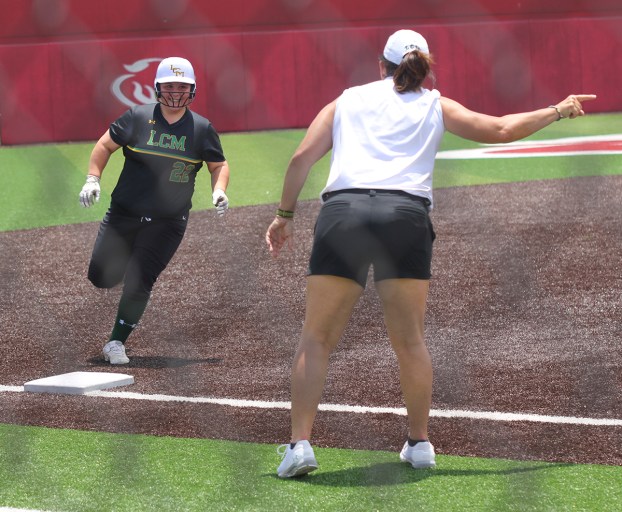 Van Wade/Orange Leader LC-M’s Bailey Frenzel zips past third and gives the “all smiles” to head coach Dena Adkins after she hit a three-run homer against Bellville Saturday.

The Lady Bears won Game One 7-1 at Bellville Friday night.

Frenzel was 3-for-3 at the plate, including a three-run home run and two sacrifice flys.

The Lady Bears will now move on to face the Huffman Lady Falcons in the 4A Region III quarterfinals next week. Huffman, the state’s last 4A state champion in 2019 as the Covid pandemic canceled out the season in 2020, swept El Campo 12-0, and 12-3 in the area round.

The Lady Bears struck for four runs in the bottom of the first.

Madeline Stephenson drew a leadoff walk from Bellville starter Kacie Dudensing. Shae Fontenot, who was 2-for-3 with two RBI, had a single to center and Frenzel came up and laced a three-run bomb over the left centerfield wall.

Ava Wright, who went 3-for-4, belted a double to left center and Cami Shugart followed with a single up the middle. Jacelyn Cook then hit a shot that was not handled at first base as Wright scooted in to score on the error.

Dudensing worked just the first inning for Bellville. She allowed four hits, walked two and struck out one. Emma Eckelberg went the rest of the way on the Bellville mound.

The Lady Brahmas came back with three runs in the top of the third, all coming with two outs as they laced four straight singles.

Daelyn Warmke, who went 3-for-4, had a two-out single to left. Avery Burnet laced a RBI single up the middle. Dudensing then sent a RBI single to right and Eckelberg made it 4-3 with a sharp RBI single past third.

LC-M scratched across two runs in the bottom of the third.

Lakin Adkins reached with one out after getting plucked by a pitch. Stephenson drew a walk and both runners advanced on a wild pitch. Fontenot then walked to load the bases. Frenzel sent a sacrifice fly to center to plate Adkins and Stephenson scored off a Wright RBI single up the middle.

Bellville trimmed it to 6-5 in the top of the fourth.

Ashley Wiktorik had a one-out infield single. Emma Wheeler reached on a fielder’s choice as Wiktorik was out at second. Warmke singled up the middle and Wheeler ended up scoring on a wild pitch. After Burnet and Dudensing walked to load the bases, Eckelberg ripped a RBI single to left, however, Burnet was tagged out at the plate in trying to score another.

The Lady Bears snared a pair of runs in the bottom of the fifth.

Stephenson laced a one-out single up the middle and went to second on an error. Fontenot then crushed a RBI triple to deep centerfield and Frenzel made it 8-5 with a sacrifice fly to left.

Bellville trimmed it to 8-6 in the top of the sixth.

Warmke had a leadoff single to right, swiped second and went to third on a wild pitch. She scored on a Dudensing sacrifice fly to left.

LC-M got some insurance runs in the bottom of the sixth.

Ansley Moore laced a leadoff single to center and Friar reached on a dropped fly ball in left. Moore scored on a nice bunt by Adkins to make it 9-6.

Friar came across to score on a wild pitch and Adkins darted home off a sacrifice fly to left by Fontenot to push it to 11-6.

The Lady Brahmas continued to show some fight in the top of the seventh.

Chloe Newman drew a leadoff walk and moved to second on a Neelie Schier groundout. Hannah LaCount laced an infield single and Newman ended up scoring off a groundout by Wiktorik.

Exkelberg tossed five innings for the Lady Brahmas, allowing seven hits while striking out one and walking four.

Bobcats sweep Panthers to move on to Area Round