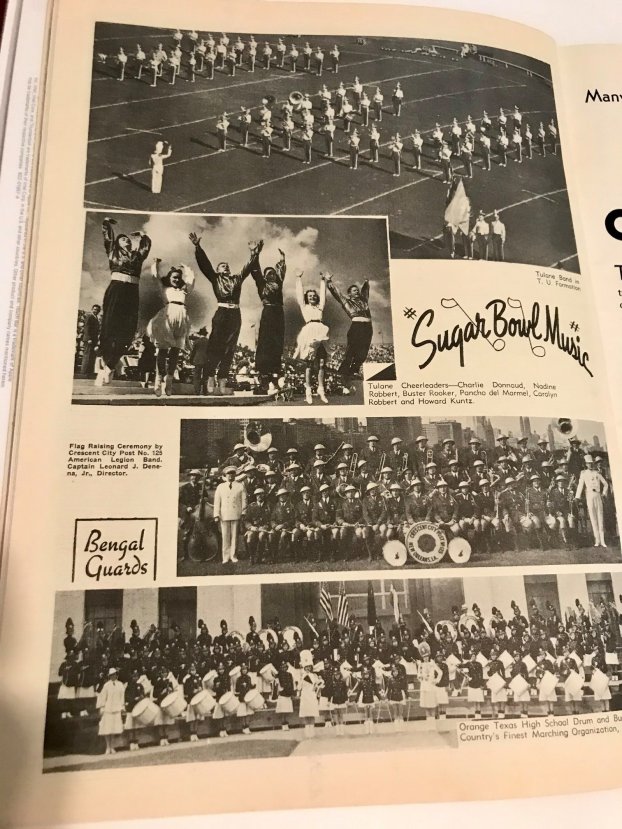 And Now You Know: Bengal Guards at the 1940 Sugar Bowl

In 1935, Lutcher Stark who had a love of music and working with youth decided to do something for the girls of Orange. Several years before he had started the Lutcher Stark Boys Band, this time he would form a drum and bugle corps of all girls. He named the group the Bengal Guards.

The Bengal Guards existed as a unity separate form the rest of the band at Orange High School from 1935 until 1944. Frank Hubert, the director enlisted in the military and Stark gave control of the corps to the high school band director and music department. In nine years, the group of hard working young ladies gained national recognition.

In 1940, they were invited to be the featured attraction at the Sugar Bowl in New Orleans. The game that year was between the Green Wave of Tulane University and the Aggies of Texas A&M College.

The Orange Leader edition of January 2, 1940 wrote “The fact remains that the Bengal Guards and the Texas Aggies took New Orleans by Storm.”

Huge Sugar Bowl crowds lined the wide main street on both sides and in the esplanade to cheer the 98 girls as they executed tricky formations in their parade starting at 4 p.m.

All six junior drum majors led by National Junior Drum Major Champion Patsy Ruth Levingston, 10, performed their own unique athletic stunts while marching and twirling their batons. Patsy Ruth lived up to the advance publicity given her by the New Orleans newspapers.”

Following the parade several thousand gathered at the Elk’s Palace and cheered the Guards two selections, the Aggie War Hymn and The Eyes of Texas.

The Bengal Guards constituted the main show for the two days prior to the game. They were in parades, various stunts, and participated in radio broadcasts.

It was estimated that there were upwards of 100,000 visitors to New Orleans who saw the Bengal Guards performances.

The sports section of the Houston Post reported on January 2, 1940: “The Bengal Guards from Orange High School took the field with Becky Havens handling her two batons and put on a great show.

The girls saluted the Green Wave and the Aggies then marched to the center of the field to play “The Eyes of Texas” as the crowd stood to cheer.

Two airplanes played over the field as the Bengal Guards marched off the field and the exploding aerial bombs caused some to think of other nations where the great sport of football is not known.”

With the score standing at 13-7, Tulane, John Kimbrough scored after a 70 yard drive to tie the score. The kick went through the uprights to give the Aggies the win 14-7.

The Bengal Guards returned to Orange in a special section of Pullman Cars on the Acadian Flyer. The total traveling group of 120 was met by parents, friends, and fans after another triumphal trip and performances that showcased the talents of the Guards.

Active cases of COVID-19 are still declining in numbers as 46 were reported for this week. The grand total of... read more