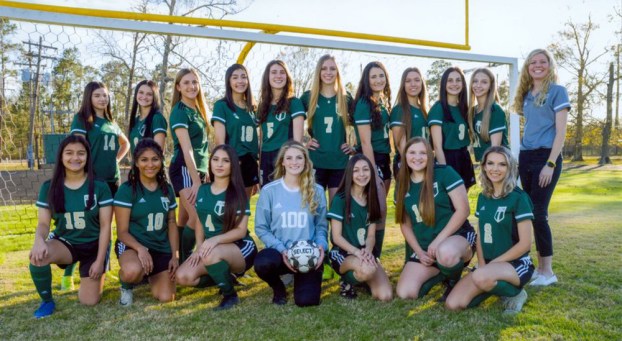 The Ladycats kept the Lady Bears on their toes from the first minute of the game and scored early on a corner kick to put the score at 1-0.

The Lady Bears worked together to begin finding their footing against the very quick Bay City (26-0) team. A few minutes after goal one the Ladycats snuck another past the defense on a rotational error by the Lady Bears.

After several defensive stops, the offense for the Bears began to gain momentum and show the Ladycats the competition they’ve missed out on all season.

Some fancy footwork by Brooklyn Leonard set up McKenzie Freeman for an opportunity to send the ball up the field to Annabelle Fisher who was patiently waiting for her chance to launch her counterattack; putting a goal in the back of the net past the Ladycat goalie.

The match remained evenly split between both teams with possession of the ball, and the Lady Bears continued to put pressure on the Ladycat defense. Fisher while in possession of the ball, drew a foul from Bay City and defender Kaylee Potter set up to take the free kick. Potter launched her shot from distance and scored on a deflection by the Bay City defense, bringing the score 2-2 and it remained tied going into half.

The second half was constant effort from the Lady Bears as they battled to come out victorious  over the undefeated Ladycats. The last fifteen minutes of the half the Ladycat offense used quick footwork to slide one in past the Lady Bear defense to put the score at 3-2.

Despite all of the efforts given by the Lady Bears they came up short in the Regional Quarterfinals. The Lady Bears finished the season tied for second place in district with a record of 8-4, and an overall record of 15-8-4.