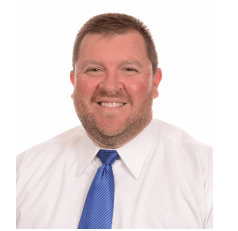 Praised for leading several innovations in his profession, Darin Landry, principal at Lakeside High School in Hot Springs, has received the 2020 Principal of the Year Award from the Arkansas Association of Secondary School Principals (AASSP). Landry is a 1994 graduate of West Orange Stark High School.

Shawn Cook, superintendent for the Lakeside School District in Hot Springs, commends Landry on his efforts to be approachable.

“Landry builds relationships with all the students,” Cook said. “I am in the high school daily, and I observe him talking with the students and calling them by name. He works very hard to keep students in school.”

To retain students, Landry found that resources, not traditional punishment, were the most effective way to graduation.

“While serving as the high school assistant principal, I recognized the impact expulsion was making on students who were in possession or under the influence of drugs or alcohol at school,” Landry said. “Because of this, we developed a Second Chance Policy.”

The Second Chance Policy program allows suspended students to complete community service hours and have access to a drug and alcohol abuse program, while keeping their status at the high school. They also complete class assignments during their suspension.

“Throughout my time as an assistant principal, this policy has helped change the mindset of discipline,” said Landry. “Instead of simply punishing students, we now focus on educating students on their choices and behaviors.”

The program also includes an alternative to In-School Suspension (ISS) called the “Restorative Justice Program” where at-risk students have access to methods to help them succeed.

“Over the course of time, we recognized that taking students out of the general population has little to no effect on changing students’ behavior,” Landry said. “Our program includes counseling, physical activity, community service, and an academic time that students participate in every day. The idea of this program is to reduce the number of repeat offenders in ISS.”

During his tenure as educational administrator, Landry has also implemented several projects such as the Lakeside Legacy Program, which allows students to obtain an Associate Degree from National Park College while still in high school; the Project Search program where students can participate in onsite job-training  in partnership with CHI St. Vincent Hospital; and the Future of Lakeside Committee, a group of parents, teachers, students, and administrators dedicated to finding a better way to rank students.

“Mr. Landry and the staff at Lakeside have promoted the welfare of each student to make sure that each person feels valued and receives an individualized, high-quality education,” said Mary Catherine Owen, a senior at Lakeside High School. “Lakeside is extremely inclusive of all interests that any student has, and therefore, we have countless clubs that are open to anyone willing to participate.”

One of Lakeside High School’s teachers said that the secret to Landry’s success was his openness to feedback.

“When you work in a building with Darin Landry as principal, there is an open-door policy and freedom to collaborate and share ideas,” said Mark Langley. “This is a culture that starts at his office door but trickles down into the entire building. I have never had an administrator who is so willing to listen to the ideas of students, teachers, parents, and staff members.”

Landry’s efforts have been recognized nationally and statewide. In 2019, U.S. News ranked Lakeside High School #9 on the Best High Schools in Arkansas list, and the Washington Post lauded the high school as one of the “most challenging” in the nation.

In 2015, Landry received the Arkansas Association of Instructional Media Administrator of the Year Award.

The secondary principal selected as AASSP Principal of the Year will have the opportunity to represent Arkansas at the National Association of Secondary School Principals Conference in National Harbor, Maryland, July 7-9, 2020. At the conference, state principals of the year will engage with school leaders from across the country, gain recognition before a national audience, and benefit from complete access to NASSP’s premier professional development offerings.