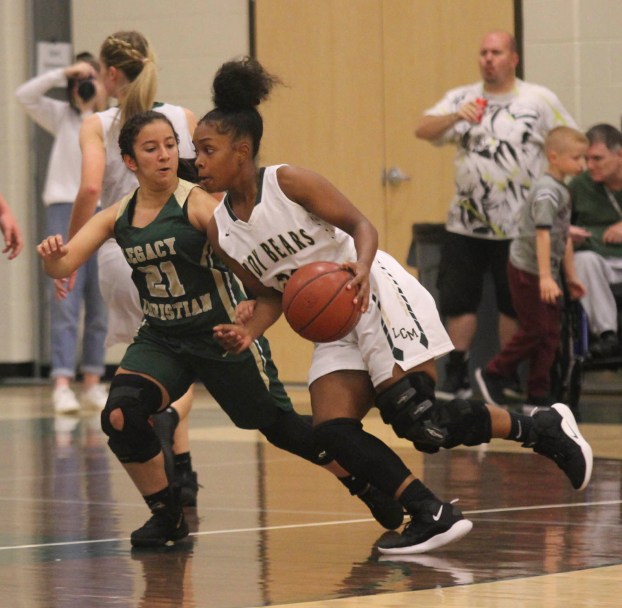 Van Wade/Orange Leader LC-M’s Zaria Johnson (23) drives past Legacy’s Kassie Chavez during the first half Tuesday night at The Grove.

LITTLE CYPRESS – Suffering from a cold shooting second half, the Little Cypress-Mauriceville Lady Bears dropped a 36-31 decision to Beaumont Legacy Tuesday night at The Grove.

The Lady Bears (1-1) were able to snag a 22-14 halftime edge but Legacy (4-1) bounced back with a huge defensive effort in the second half as they went on to outscore the Lady Bears 22-9 after intermission. Legacy held LC-M to just three second-half field goals.

Chelsea Perry led the Lady Bears with 12 points and had five rebounds before fouling out in the fourth quarter. Britney Wyatt tallied nine points and grabbed five boards for LC-M.

Pleasant tallied six of her points in the first half for the Lady Warriors.

Legacy outscored LC-M 9-4 in a sloppy third quarter as Chavez pumped in five points in the period.

The Lady Warriors went on a 13-5 spurt to finish the contest as Chavez and Reynolds teamed up for 13 points down the stretch to hold back the Lady Bears.

Legacy finished with a 27-22 rebounding edge.

Both teams struggled from the line as Legacy went 7-of-16 and the Lady Bears converted just 4-of-13.

Legacy finished with nine turnovers while the Lady Bears had eight.

Lady Bruins get past Lady Bobcats, 56-43