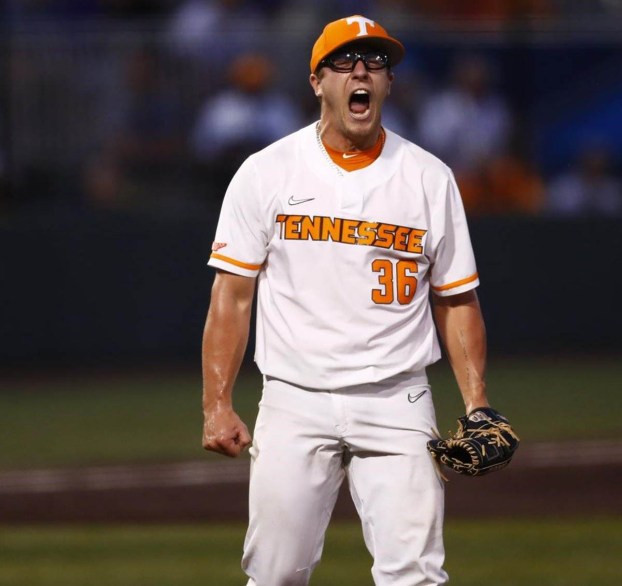 Photo courtesy Tennessee Athletics Tennessee’s Chad Dallas reacts after recording one of his 12 strikeouts against LSU.

KNOXVILLE, Tenn. – A dominant effort on the mound by West Orange-Stark graduate Chad Dallas and a three-run sixth inning led No. 2 Tennessee to a 4-2 victory over the No. 14 LSU Tigers in game one of the Knoxville Super Regional at Lindsey Nelson Stadium on Saturday night and then the Volunteers came back Sunday to smash the Tigers 15-6 to seal a berth in the College World Series.

For the first time in program history, Tennessee (50-16) hosted a Super Regional game. In what was an electric environment, a three-run sixth inning provided the timely spark No. 2 Tennessee needed to claim the win over the Tigers (38-25) in game one.

Jake Rucker and Jordan Beck each went 2-for-4 at the plate and scored a run while Beck also drove in a run during UT’s big sixth inning. Luc Liipcius also had a hit and an RBI for the Big Orange while Drew Gilbert and Connor Pavolony and had an RBI apiece, as well.

Dallas earned his 11th win of the season, dealing a career-high 12 strikeouts on the night, the most in a single game by a Tennessee pitcher this season. In a strong six innings of work, the junior right hander allowed just one earned run on five hits while issuing no walks.

Sean Hunley was dominant in three shutout innings of relief to record his ninth save of the year. The senior from Mount Juliet, Tennessee, had four strikeouts while allowing three hits and no walks.

In the top of the second inning, LSU’s Cade Doughty connected for a solo home run to right field with one out to open the scoring just prior to a 50-minute lightning delay which was sandwiched between the second and third innings.

Once play resumed, LSU came to the plate and Alex Milazzo’s pop up to second base was snagged by a diving Max Ferguson, re-energizing the Tennessee crowd after the delay.

Beck’s leadoff double to left center in the third inning aided the Vols in knotting the score at one, as he would eventually score on an RBI ground out by Pavolony.

Dallas, who had eight strikeouts through four innings, got out of a jam to start the fifth by limiting the Tigers to just one run after LSU had runners on first and second base with no outs. LSU’s lone run in the inning came off a throwing error to third base on a stolen base attempt that skipped into the outfield.

Dallas recorded his ninth and 10th strikeouts of the night in the next two at-bats before a ground out ended the top half of the inning.

Tennessee’s offense got things going in the sixth inning when Ferguson battled back from an 0-2 count to draw a walk. Rucker then stepped up to the plate and blasted a double down the left field line to out runners on second and third. Gilbert then tied the game with an RBI fielder’s choice. Another RBI fielder’s choice by Lipcius gave Tennessee a 3-2 lead before Beck singled to right field to plate the game’s final run.

The Vols’ displayed some stellar defense to get out of a small jam in the top of the eighth with a strike em’ out, throw em’ out double play to end the frame and Dylan Crews led off the inning with a single.

LSU threatened again in the ninth, getting runners to second and third with two outs, but Hunley ended the threat and the game with his fourth strike out of the night to lock up the Vols’ 4-2 victory.