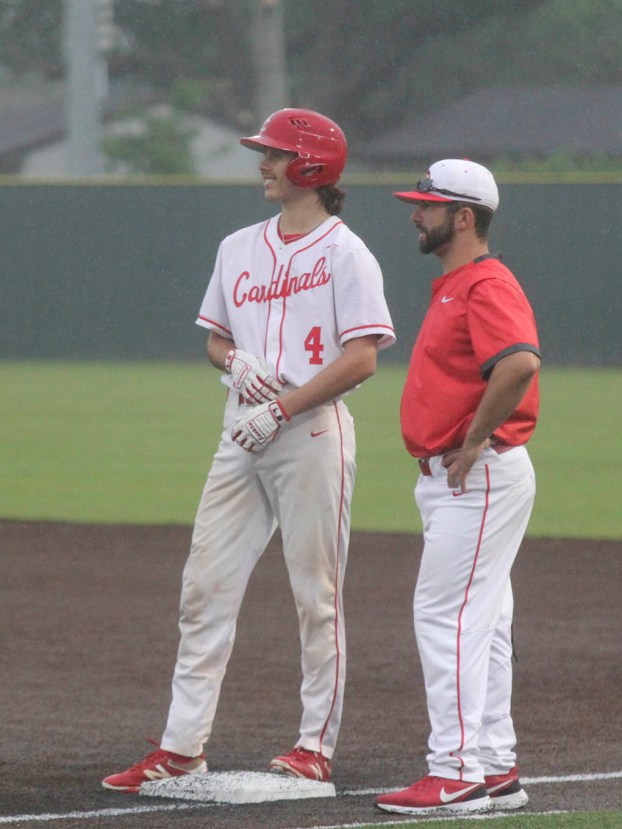 The weather played a factor in this game, causing a couple delays during the game, but overall the teams were able to finish the game out without much issue.

Slade Foreman got the start for the Cardinals (13-10-1, 5-4) He went five and a third innings on 103 pitches. He gave up nine hits, three walks and four runs scored on six strikeouts for the night. Foreman did a good job of letting his defense work for him early on. The only major issue he ran into was the bottom of the fifth inning where the Tigers (14-7-1, 5-3) got four hits and three runs off of him, other than that blip he would throw a great game for the Cardinals and give them a good chance to take a win.

The Cardinals got the game’s first run in the bottom of the first inning. Foreman led off with a strikeout, but the catcher couldn’t hang on and made a bad throw to first and Foreman would advance to second on the play. Sam Carpenter and Kade Benoit both draw walks to load the bases, followed by another walk to Fielder, allowing Foreman to score from third base. Cayden Baker would draw the fourth walk in a row for the Cardinals, bringing in Carpenter to score. Danks drew the innings’ fifth walk for Fielder to come around and score as the Cardinals led 3-0.

The Tigers scratched in a run back on the Cardinals in the top of the fourth. Quincy Kelly started it off with a big double to right-center field, followed by a Jaci Hartman single to move Kelly to third base. Shan Gilder laced a single, allowing Kelly to score from third, Hartman would try and sneak around and score on the play but would get thrown out at home plate. The Tigers got a run back, but the Cardinals lead 3-1 heading into the bottom of the fourth inning.

The Tigers struck again in the top of the fifth inning. A string of three singles would load the bases. Taylor Wise, Cash Glaze and Chance Partain would load the bases for Kanon Sundgren. Sundgren hit a deep sacrifice fly to score Wise from third and move the other two runners up to second and third base. A wild pitch would let Glaze come across for the second run. Kelly kept the rally alive with another single to bring in Partain for the score. The Tigers took the lead this inning scoring, three runs with four hitsas Silsbee led 4-3 heading to the bottom of the fifth.

Danks delivered in the bottom of the fifth for the Cardinals with a big hit, responding to the Tigers’ big inning. Fielder, Baker and John Van Huis each walked to load the bases with two outs. Danks smashed one to right field, soaring over the outfielder. All three runners would come around to score and Danks would end up on second base for a double. The Cardinals wouldn’t get anymore, but did take a two-run lead at 6-4 over the Tigers after the fifth inning was done.

The Cardinals extended their lead in the bottom of the sixth inning. Foreman led off with a walk, followed by a walk from Brice Swanton to put runners on second and first base. Kade Benoit connected and send a liner to shallow right field, enough space for Foreman to come around from second base and score. During the next at bat Swanton raced home on a wild pitch for another run. Fielder would connect with one as well and send Fielder home for another run.

The rally would continue with a walk and wild pitch that moved Fielder over to third base, and another wild pitch would let him come across to score. A balk brought Baker around to score, who reached on a walk and got moved over to third thanks to a walk and grounder. The Cardinals would take a massive lead scoring five runs, going up 11-4 over the Tigers heading into the seventh inning.

The Cardinals would put a bow on the game and finish it in the top of the seventh thanks to Trey Lovelace closing the game out. Cardinals move to 5-4 in the district while the Tigers fall to 5-3, losing two in a row this week.

The Cardinals are getting ever closer to the playoffs and every win means that much more, this win put them over the Lumberton Raiders in the standings, who sit at 4-5, now after losing to Orangefield. The playoff race should be tight till the very end.

The Cardinals are alone in fourth place, just a half game back of both Silsbee and LC-M, who are tied for second.

Lady Cardinals zip past Silsbee in 5