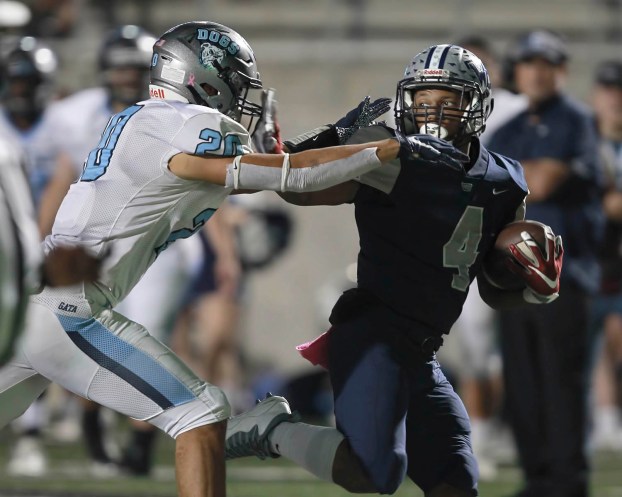 WEST ORANGE – After romping through the Sweeny Bulldogs 59-8 to open up the Class 4A Division II Region III playoffs last Friday, the West Orange-Stark Mustangs will look to ring down a much tougher opponent this week when they take on the China Spring Cougars Friday night at 7:30 p.m. at Magnolia’s Bulldog Stadium in the area round.

The Cougars (8-2), the third-place team out of District 9-4A Division II, turned some eyes last week with a 45-19 demolition of fourth-ranked Jasper and will look to try and stun the state this week when they take on the second-ranked Mustangs.

China Spring controlled Jasper from the beginning of the game all the way to the end last week, chewing up the Bulldogs with their vaunted running game.

China Spring runs pretty much out of a spread offense, but their running game is certainly their forte with the 1-2 punch of running back Emmanuel Abdallah and quarterback Major Bowden.

Abdallah has been hard to stop all season as he has zipped through opposing defenses for a whopping 1,815 yards and 25 touchdowns on 202 carries.

Bowden runs a tight ship and has rumbled for 1,202 yards and 15 TDs on 129 totes behind a physical offensive line.

China Spring coach Brain Bell felt he had something special entering the season as he saw just 11 seniors graduate from last year’s 4-8 4A Division I team that made it to the area round.

They not only moved down a division to 4A Division II, they returned 13 starters, six on offense and seven on defense.

It should be a battle of wills in the trenches with the Mustangs and Cougars. The Mustangs have shown great pride over the years in stopping prolific rushing attacks and this year has been no exception.

WO-S has outscored their opponents 379-42 after giving up a season-high eight points to Sweeny.

WO-S quarterback Jerren Terrell has completed 79-of-144 passes for 1,360 yards with 17 TDs and just three interceptions.

Receiver Jalen Thompson has been a huge deep-play threat all season and leads the Mustangs with 21 receptions for 509 yards and 10 TDs.

China Spring will face a WO-S unit that was clicking on all phases last week as the Mustangs also got scores with their return game, a pick-six, and a fumble return for a TD.

WO-S also has a superb weapon in kicker Angel Ibarra, who has scored 67 points this season and has connected on seven field goals.

The WO-S-China Spring winner will face either Sealy or Center in the 4A Region III Division II semifinals next week.