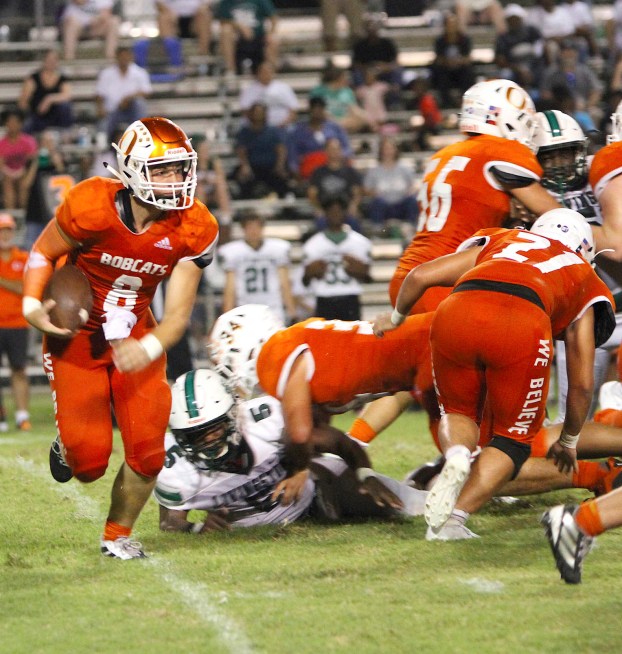 ORANGEFIELD – The Orangefield Bobcats made it look easy Friday night as they hosted the Lions of Livingston. The Bobcats were solid in all phases of the game including 223 rushing yards by the offense that lead to a 20-14 win.

The Bobcats (2-0) received the opening kickoff and quickly went three-and-out as the Cats’ rushing attack was stalled early. It would be the Orangefield defense that stepped up early with Kolby Woods making a big stop, forcing the Lions (1-1) into a passing situation on third down.

Lion quarterback Damien Ruiz would be intercepted by Heston Puckett on the following play to give the Bobcats the ball back near midfield.

Orangefield made the most of the turnover following the interception. Bobcat quarterback Gunner Jones found Kaedon Evans for a 21-yard pass. Jones capped the drive with a four-yard keeper a few plays later to catapult the Bobcats out front, 7-0, following the extra point. Evans finished the night with 71 yards of total offense.

The Bobcats caught a break on the ensuing kickoff. Keon Perkins broke an 80-yard kickoff return for a touchdown but was negated after several penalties. The Lions would take the ball at their own 40, but the Bobcat defense were relentless, pushing the Lions back and shutting down any would-be holes the Lion backs could find. Following a narrow first down by the Lions, the Bobcats forced a fumble when Cody Dupas coughed up the ball in Bobcat territory.

The two squads would swap three-and-outs before the Bobcat offense would get going again. The defense forced the Lions to punt, but the Cats’ offense would find themselves with a long field as they would start at their 3.

Orangefield drained nearly nine minutes off the clock, driving 97 yards on 19 plays to wear down the Lions and push ahead 14-0, leaving less than two minutes left in the first half. The drive was sparked by Kaiden Dubose, who torched the Lion defense for a 32-yard run to keep the drive alive on third down. Clayson Choate chipped in with several big runs on fourth down to keep the Bobcats moving. Jones skipped in from one yard out to cap the drive and put the Bobcats ahead, 14-0, to end the first half of play.

The Lions opened the second half much like they ended the first half with little-to-no answer for the Bobcat defense. Hunter Ashworth got the Cats’ defense fired up early in the second half with a huge sack followed by Heston Puckete breaking up a Ruiz pass as the Lions again went three-and-out.

Livingston started to show life with a big defensive stand forcing Orangefield to punt after three stuffed run plays. A muffed punt by the Bobcats gave the Lions excellent field position at the Bobcat 25. Ruiz hit Julian Gardner for a 21-yard pass on the first play of the series. Ruiz polished off the drive with a five-yard touchdown run to put the Lions on the board and trailing by one score, 14-7, with 9:38 left in the third quarter. Ruiz finished the night with 88 yards rushing while tossing for 68 yards and two interceptions.

The Bobcat offense got a burst with a 40-yard run by Choate to start the ensuing drive that pushed the Bobcats down to the Lion 12. Unfortunately, the Bobcat offense would turn the ball over on downs unable to put any points on the board.

Despite the offense sputtering, the Bobcat defense stepped up in a big way. Choate intercepted Ruiz two plays later to hand the ball back to the Bobcat offense. It didn’t take long for the Orangefield offense to wake up. Dubose erupted off the left side for a 34-yard touchdown run on a quarterback keeper to push the Bobcats ahead 20-7 with 2:51 left in the third quarter. Dubose finished with 62 yards on the ground for the Bobcats.

Following another negated Lion kickoff return for a touchdown, Bobcat fans had plenty to cheer about heading into the fourth quarter leading, 20-7, while Livingston starting the ensuing drive inside the Bobcat 20. The speedy Ruiz breathed some life back into the Lion offense with a 17-yard touchdown run several plays later after wearing down the Bobcat defense. The Lions trailed, 20-14, with just under 10 minutes left in the game.

Penalties along with a swarming Bobcat defensive front stalled any chances of the Lions comeback. Hunter Ashworth notched three sacks for the Bobcats defense that finished with three turnovers while holding the Lions offense under 200 yards.

The Bobcats will stay home next week and look to remain perfect on the season as they host Shepherd. The Lions will regroup and host a stout Liberty team.