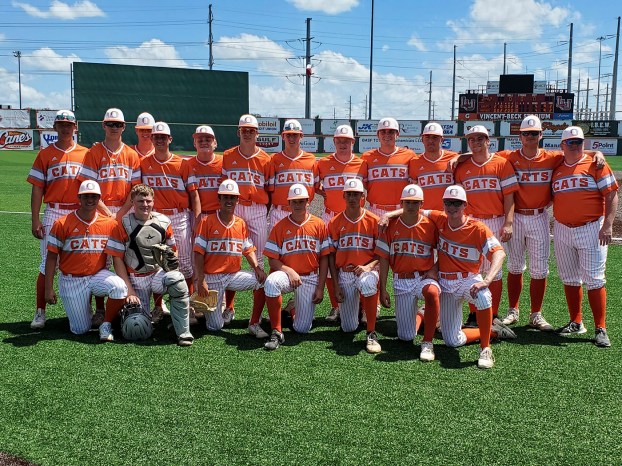 Bobcats sweep Panthers to move on to Area Round

BEAUMONT – The Orangefield Bobcats took care of the Liberty Panthers 5-4 in Game Two of the Bidistrict round of playoffs at Lamar University’s Vincent-Beck Stadium Saturday to sweep their Class 4A Region III series.

The Bobcats move on to the second round of the playoffs with this win and continue their playoff run as they will face Sealy in the Area Round next week.

Logan Gipson got the start on the mound for the Bobcats. He would go the first four innings, giving up four runs on five hits with two walks and three strikeouts. Gipson did a good job early of letting his defense do the work for him, getting through the first couple of innings quickly. He would run into trouble in the third and fourth innings, giving up two runs each.

The second half of the Gipson pitching duo, Jace Gipson, took care of the rest of the game for the Bobcats. Jace got the save to help wrap up the win. He would give up three hits and a walk, but no runs allowed. There was a chance for the Panthers in the seventh inning but a good throw took care of the threatening run.

Offensively, the Bobcats had a good outing with nine hits for the team. One player that stood out was Tyler Washington, the leadoff hitter for the Bobcats. Washington went 2-for-4 with a game-starting double and a two-RBI single in the sixth inning that would end up being the decisive runs in the game. He played a big role at the top of the lineup all game long and helped the Bobcats take this first round playoff win.

Kaden Nolan started for the Panthers on the mound. He gave up five runs on nine hits, had two walks with no strikeouts in six innings. Nolan did a good job stemming the bleeding the Bobcats caused, but couldn’t do enough to keep the lead his team got him in the fourth inning. The Bobcats got a few big hits in clutch situations that Nolan couldn’t recover from.

The Bobcats got on the board early thanks to good baserunning. Washington led the game off with a shot for a double in the right-center gap, and would take third on a wild pitch from the Panthers. Kamryn Henderson sent him home with an infield grounder. Logan Gipson would single, to keep things going and get moved around to third base thanks to a double from Gunner Jones. A passed ball during the next at bat would let Gipson score as the Bobcats took a 2-0 lead after the top of the first inning was done.

Henderson extended the lead for the Bobcats after beating out an infield hit. Jason Bodin would start things off with a single past the infield. He got moved over to second base thanks to a sacrifice bunt from Washington, and then moved to third after a wild pitch. Henderson hit a dribbler to shortstop, but just barely beat out the throw, allowing Bodin to score from third base as the Bobcats snared a 3-0 lead after the top of the second inning was done.

The Panthers got their first run in the bottom of the third inning. Kade Jordan led off with a walk, and took second base after a wild pitch. Mason Goudeau reached on an error, advancing Jordan over to third base. Joe Taylor hit into an out, but Jordan would score on the play for the Panthers’ first run. Nolan laced a hard double up the middle and scored Goudeau on the play, but Nolan would be put out at third trying to stretch it out. The Panthers cut the lead to one with the Bobcats leading 3-2 heading into the top of the fourth inning.

The Panthers jumped on top in the bottom of the fourth inning. Caleb Ingram reached on a lead off single, followed by Palmer Simeon, who laid down a bunt for a single. Jaden Shimp hit into an out but would advance the runners to second and third base. Kade Jordan then laced a liner up the middle to score both Ingram and Simeon as the Panthers took a 4-3 lead after the fourth inning was complete.

Washington, with a big two-out hit gave the Bobcats the lead again. Ryan Trahan reached on an error and advanced to second after a single from Jason Bodin. Macoy Marze would sacrifice bunt to move the runners to second and third base. Washington came up with two outs and popped a single over second base and scored Trahan and Bodin on the play to give the Bobcats a 5-4 edge heading into the bottom of the sixth.

The Panthers would take a chance at tieing the game in the bottom of the seventh, but came up just short thanks to a great throw from Bodin in left field that got the runner out at home plate to end the game.

Lady Bears trip up Bellville in Game One

BELLVILLE – The Little Cypress-Mauriceville Lady Bears notched a 7-1 Game One win over the Bellville Lady Brahmas in their... read more