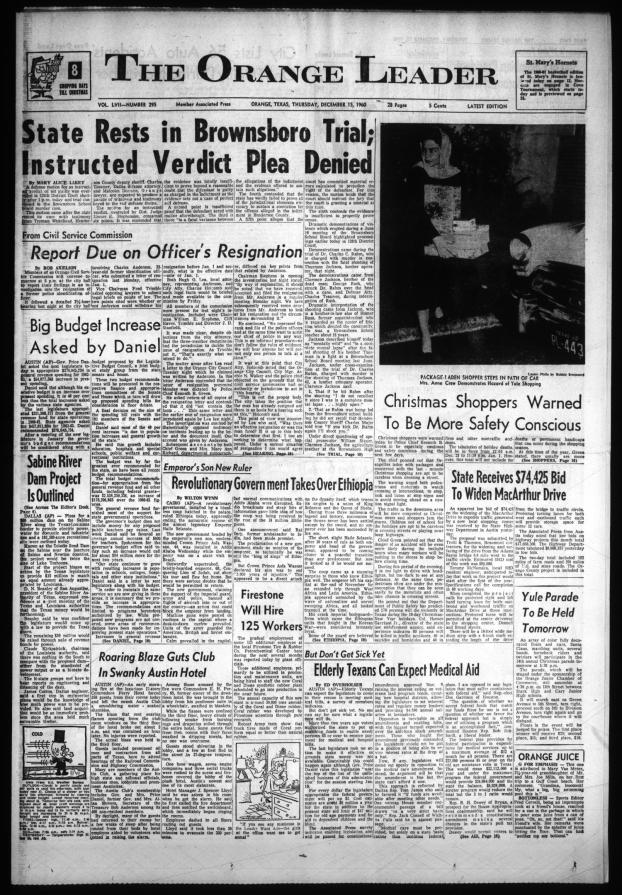 And Now You Know: One hundred called for jury service

A change of venue was resulting in the largest murder trial ever held in Orange. A jury panel of 100 Orangeites had been called by the Orange County District Clerk. The trial was the result of months of dissention in Brownsboro, Texas over problems in the school district.

Dr. Charles Rahm was charged with the murder of Thurman Jackson on June 16, 1959. The trial was set to start December 16.

Jackson was a prominent lumber dealer in Brownsboro. He was killed by a gunshot after a fight broke out during a heated school board meeting. People had been hit with chairs and fists; one man used his walking cane to hit and jab people. After his cane had been taken from him, he pulled a knife. The fight only stopped after gunshots were fired.

The trial had been transferred to the 128th District Court in Orange on a change of venue by District Judge Melvin Johnson of Athens.

The state had initially called a dozen witnesses, then District Attorney Jack Hardee of the 3rd Judicial District in Athens requested that two more witnesses be called. They were Clarence Jackson and William Jackson, both men were from Richardson and both were relatives of the slain man.

The defense had called 35 persons through its Orange representative, Attorney Malcom Dorman, who was to assist Charles Tessmer, a noted criminal attorney from Dallas.

The lead prosecuting attorney was to be Bill Steger of Tyler, who was also a candidate for governor.

It was “reported reliably” to the Leader that one of the summoned witnesses, Bill Melton, had pled guilty to assault and battery charges in connection with the fight during the meeting. Melton had been fined and ordered to pay court costs after being found guilty in a justice of the peace court.

The complaint against Melton had been signed by Deputy Sheriff Charles Majors. It had been filed three days after the shooting.

The AP reported the incident stemmed from “a smoldering feud which has split this East Texas town.”

Among witnesses summoned were Texas Rangers who had been requested to stand guard at the meeting and several school officials from Austin, including Dr. J.W. Edgar Commissioner of Education for Texas.

Dr. Rahm was charged with intent to murder in connection with Jackson’s shooting. If Dr. Rahm was found innocent of the murder charge a second case against him would be substantially weakened.

Dr. Rahm’s attorneys indicated they would plead self-defense on the basis of conditions outlined in their brief which alluded to “predictions of serious trouble and the pinpointing of the date, June 16 as the time on which it will occur.”

The case had made national news. It had been covered by the wire services which had generated much interest and it was expected to bring a number of press, magazine, radio, and TV representatives to Orange.

By Dawn Burleigh Friday was the last day of early voting in the Primary Runoff Election. As of Thursday, 549... read more