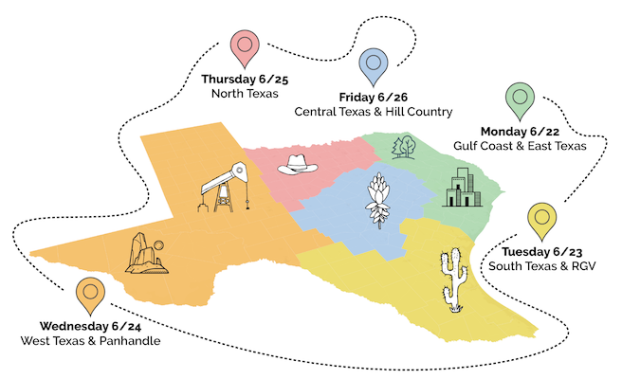 Photo courtesy of texascounts.org A 1% undercount of the population from the 2020 census could translate to a loss of $300 million in federal funding for Texas.

On the virtual road in Texas to promote the 2020 Census

AUSTIN, Texas — From the Gulf Coast to the Panhandle to the Rio Grande, Texas census organizers are hosting a virtual road trip this week to increase the state’s response rate.
As of June 17, only 56% of Lone Star residents had completed their census questionnaires, making Texas 41st among the 50 states. Katie Martin Lightfoot, census community engagement coordinator for the Texas Counts Campaign, said the low response rate endangers billions of dollars in future funding. She noted that one in four Texans, including many children, are undercounted or hard to count.
“Our young kiddos — so, our zero-to-four-year-olds — people of color, folks whose English might not be their first language, immigrants as well,” she said. “So again, it’s really important for us to be getting the message out to folks, letting them know that the census is safe and easy to fill out.”
The Texas video road trip will provide the latest information and take questions from residents of the Panhandle in West Texas today, North Texas tomorrow and the central Texas Hill Country on Friday. Find out how to join at TexasCounts.org.
Deborah Stein, network director for the Partnership for America’s Children, said census figures determine funding for child care, medical care, housing and other programs that give children their best start in life. She added that for the past 40 years, the number of young children missed in the census has grown steadily.
“We’re missing all of them, but we absolutely are missing more Black and Hispanic children,” she said. “The bureau did not develop data on other racial and ethnic groups, but we believe they also probably got missed at higher rates.”
Many Hispanic and Latino families have raised concerns about returning the census forms based on their immigration status, but Sarah Brannon, managing attorney for the ACLU Voting Rights Project reminds those who are worried that there are laws regulating the privacy component of the census process.
“It is against the law,” she said, “for the Census Bureau to disclose or public publish any of their private information it collects as part of the census process that would identify an individual or their address, or any of the personal information collected about that individual.”
Mailed census forms must be returned by Oct. 31 or can be completed online at 2020census.gov.
More information about the Texas Counts Virtual Road Trip is online at google.com.

What to know about financial advising career paths

(StatePoint) If you’ve decided to pursue a career in financial advising, there are a few things you should know about... read more