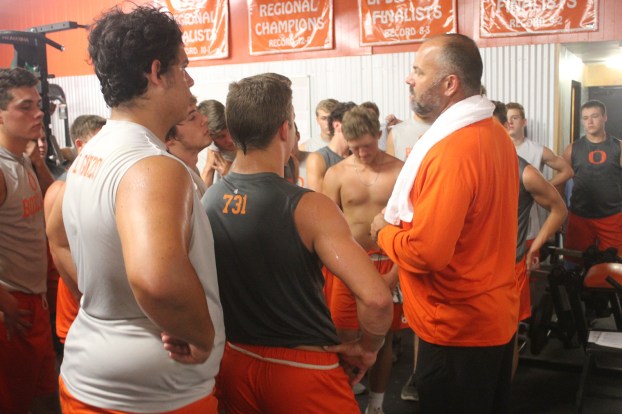 Smalley anxiously eager to welcome back Fighting Bobcats in summer

ORANGEFIELD – Plans for summer workouts and getting prepared for the upcoming high school football season remains up in the air for head coaches, football staffs and players across the state as everyone is playing the waiting game due to the coronavirus.

It’s been an ordeal, especially with programs missing those important offseason workouts in the spring and getting to know their future teammates better.

At Orangefield, long-time head coach Josh Smalley is patiently waiting to see what happens in the next month or so.

Smalley, like many coaches across the state, is trying to guess a timeline.

“I think July 1 might be a possible start date when we can possibly get kids back and working out at the school,” said Smalley. “There may possibly be less restrictions to make up for some of the missed time that we had in the Spring offseason, but who really knows.”

Like many coaches, Smalley missed the Spring offseason time and communicating with the kids.

“Spring offseason is important,” said Smalley. “The thing with us, is that we had so many of our football kids competing in other sports like baseball and track, but they were still getting plenty of work in the weight room and were together with their teammates when they were in there.”

The Bobcats had a superb 9-2 season last year with a very competitive and large senior class that was hungry to perform. That led to one of the best Bobcat seasons in school history.

Heading into the 2020 campaign, the Bobcats are not only moving up to the Class 4A classification, they will also likely be the youngest team and have the least varsity experience compared to their new district counterparts.

“That’s where missing a lot of offseason work can hurt because it gives the kids more time to work together and get to know each other and it helps with overall chemistry and it helps them develop more mentally and physically,” said Smalley. “We had some great leadership from a great senior class this past year and we believe we have some kids that can step in and fill those roles like our quarterback Gunner Jones and brothers Kyler and Grant Metts and several others.”

Of course, Smalley, a former quarterback in his high school playing days at Bridge City, is also aware of what the Texas summer heat can bring and he wants the players to gradually get back into the process as soon as they get the word “go”.

“Maybe I’m just getting old, but it seems like it gets hotter every year,” laughed Smalley. “We want the kids to be able to use the facilities but there are so many variables that could be involved and that includes some parents who may not want their kids in the environment that we are in and that’s totally understandable at this point. We want to make sure that everyone is safe for sure.”

Smalley and the coaching staff have been able to communicate with the athletes through phone calls, texts and assorted apps.

“The one thing about living in a small, tight-knit community is that we have been able to see the kids from time to time, especially like at K-Dans and that’s great when that happens because we really miss the kids,” said Smalley. “We’ve been able to communicate with them pretty well and helping them set up workout plans. The app the kids really like is the sportsYOU one. They get to communicate with each other and talk about workouts and how everything is going.”

Smalley knows that plenty of the athletes have been busy.

Smalley is also pleased to have a coaching staff that he has been fortunate enough to work with for years.

“We’re blessed to have the staff we have and we’ve had very little turnover over the years,” said Smalley. “What’s great is that we’ve been together so long, we’ll be ready to hit the ground running as soon as we get the go-ahead to get things going again. We’re in constant contact. It was great to see those guys last week when we collected equipment.”

Smalley can’t wait until everyone can get back together again.

“It’s been a tough deal, feeling all isolated and all, and I pray that everything gets better soon,” said Smalley. “Everyone’s safety is still what matters the most. But it sure will be great to see all of those familiar faces again when everyone is allowed to come back.”