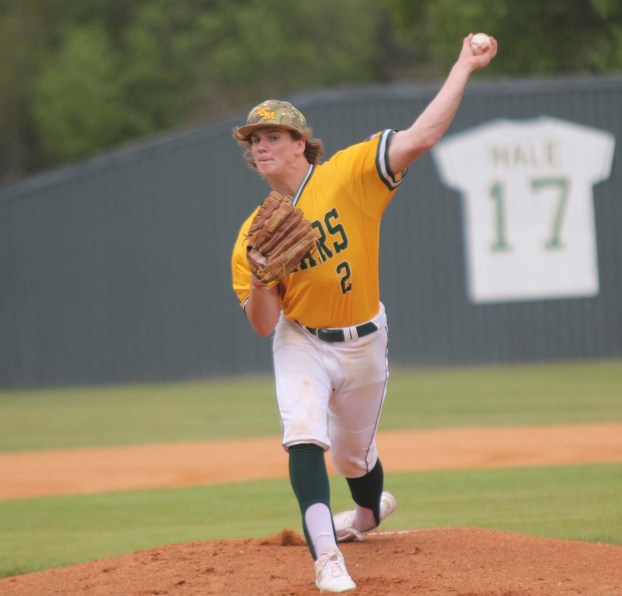 LITTLE CYPRESS – The Little Cypress-Mauriceville Bears pelted the Anahuac Panthers 8-0 in game one of the Orange County Baseball Classic at LC-M Thursday afternoon.

Offensively the Bears lineup produced from top to bottom throughout the game, but Zach McNeil led the team with three runs batted in and a homerun to help propel the team into a lopsided win over the Panthers.

Anthony Bandiero would get the win on the bump for the Bears. He went the full game with 98 pitches in 6 innings, allowing no runs, four hits and nine strikeouts on the day. He was able to mix in strikeouts while getting players out using his defense when he needed it.

The Bears took the game’s first run in the bottom of the second inning. Austin Smith got on with a single and swiped second base to put himself in scoring position. Dean Reynolds followed up with a hit over the shortstop, shallow enough in the hole to let Smith score from second base. That’s all the Bears would find, but they took an early 1-0 lead over the Panthers heading to the third inning.

The Bears found another run in the bottom of the third thanks to a long sac fly. Ty Moreland led off with a double and was pinch ran by Gage Griffith. Griffith advanced to third on a wild pitch and Zach McNeil answered with a long fly ball to deep center, with plenty of time for Griffith to score from third on the tag as the Bears took a 2-0 lead heading to the fourth inning.

LC-M extended its lead even further in the bottom of the fourth, for their third straight inning with a run. Zach Krummel smacked a double to lead off the inning, he stole second base and advanced to third on a wild pitch, and took home on a wild pitch as well. Ashton Landry would hit into an error, allowing Reynolds to score after reaching on a walk a few batters earlier as the Bears nabbed a 4-0 lead heading into the fifth inning.

The middle of the lineup for the Bears sent a couple homers over the fence to extend the lead even more. Bandiero would lled off with a bomb over centerfield to get things started. Hunter Perkins would follow up with a walk to bring up Zach McNeil. McNeil would send one over the left center field fence to bring in Perkins and himself in one swing. The Bears scratched in another run thanks to Landry’s line drive to left center to score Krummel who got on with a walk.

The Bears closeed out the game without threat of even giving up a run all game. No runner would get past second base thanks to Bandiero’s great outing.

JASPER – The Bridge City Cardinals belted Longview 9-2 in their first game at the Jasper Tournament Thursday. The Cardinals... read more